Come see for yourself

The history of Andean textiles stretches back thousands of years, to the first people to settle along the coast of what is modern-day Peru. Since ancient times, textiles were valued as the primary form of aesthetic expression and communication since the pre-Hispanic societies never developed a system of writing. Ancient weavers gave life to original styles, motifs, and techniques, many of which are unique to these pre-Hispanic cultures that developed throughout the desert coasts and mountain highlands of the Andean region. Contemporary Andean weavers inherited this rich textile tradition and today proudly continue in the path of their ancestors as they adapt to the changes and opportunities of our modern age. Andean weavers pioneered new weaving techniques, such as the triple weave and quadruple weave. The use of fine yarn and consistency in stitch size is remarkable, with analyses counting an average of 250 wefts per inch, and some samples exceeding 500 wefts per inch.1* A combination of cotton and dyed camelid fibers contribute to both structural strength and colorful imagery of the textiles.

The Inca: Masters of the Textile Art 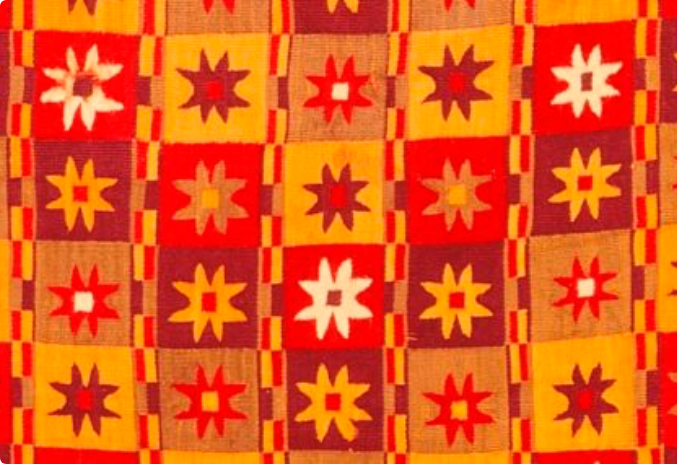 The Colonial Era: Destruction and Recreation 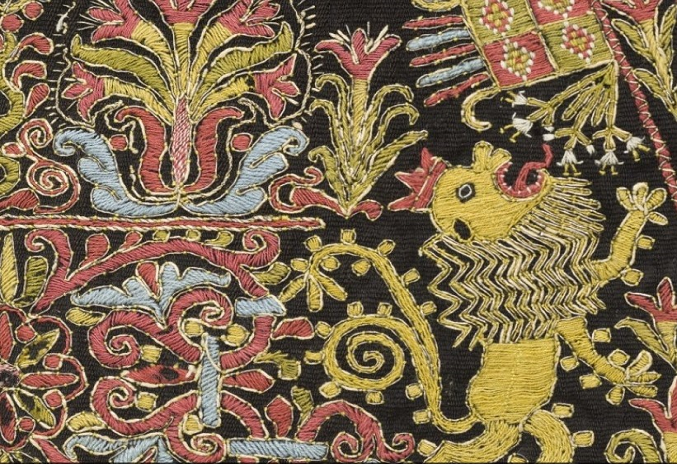 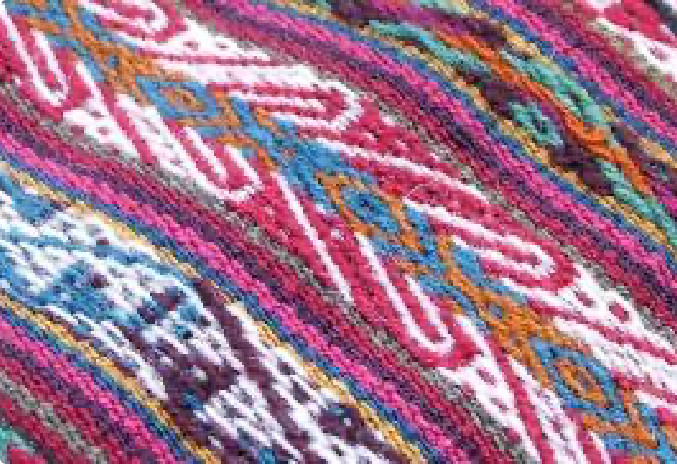 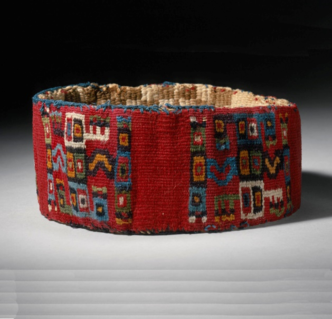 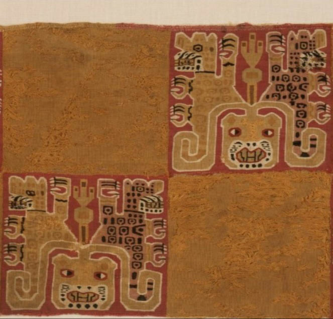 The earliest textile evidence dates back to 8000 BC found in the Guitarrero Cave in the Ancash Region (north-central highlands of Peru). Corresponds to examples of basketry and other containers made with vegetable fibers incorporating interlacing and knotting woven structures. These fragments correspond to the pre-ceramic period. 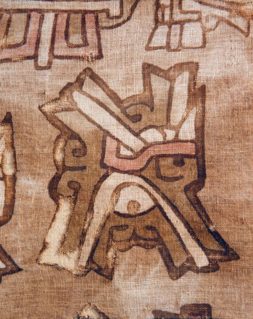 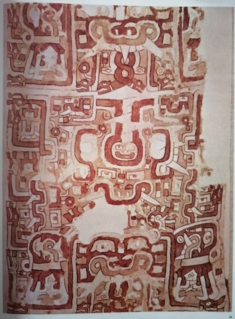 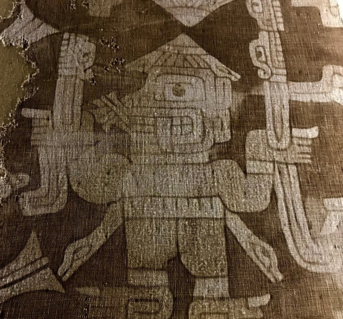 The Chavín culture from the Early Horizon takes its name from the Chavín de Huántar archaeological site, located in a fertile valley of the central Peruvian highlands. Chavin was the first great culture of ancient Peru. Painted plain weave cotton fabrics mark the beginning of the development of the Chavin style as well as the extensive production of textiles for ritualistic and symbolic purposes. 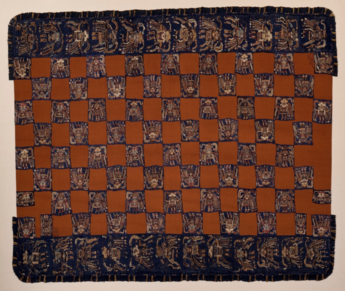 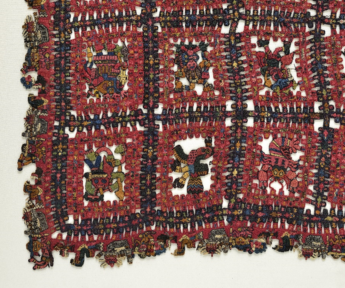 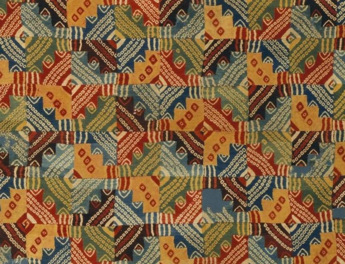 Paracas (late Early Horizon) and Nasca (Early Intermediate Period) flourished in the southern desert coast of Peru, a very arid geographical region that was crucial to preserve one of the most exceptional textile legacies known in the history of humanity. Paracas and Nasca fabrics powerfully communicate, through the woven language, unique aspects related to each culture´s cosmovisions, highlighting their systems of belief and connection between the natural world and the supernatural realm. The mastery of embroidery, tapestry, and natural dyeing techniques are particular to this period. For these outstanding textile cultures, weaving became venerated as a living being and in most cases preserved in underground tombs for ritualistic purposes.

The textile techniques practiced throughout this period were widely diverse including kelim, interlocking, eccentric tapestry; pattern weaves; weft scaffolding; twining; plaiting; lace; brocade; wrapped weaving, and double cloth. Several different methods of embroidery were developed in both cultures. One of the most remarkable embroideries is the looping technique, originally created by the Paracas but later developed and mastered by the Nasca. It’s a complex three-dimensional embroidery stitch that shows a variety of finely constructed figures using the finest fibers and threads to make truly magnificent pieces. The Paracas and Nasca created expressive and unique borders for their textiles from the looping technique, using small needles made from cactus spines, fish bones, metal, or wood. 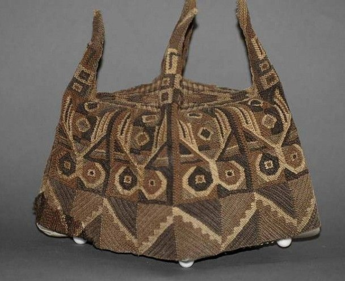 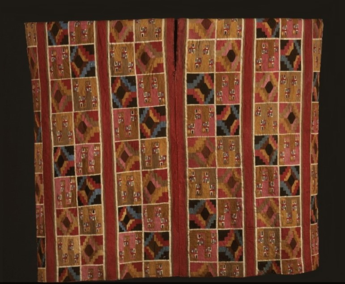 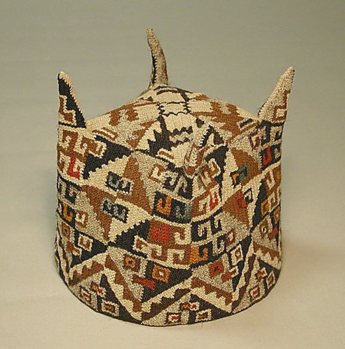 The Wari, known as the predecessors of the Inca, was a culture from the Middle Horizon that occupied the Southern Peruvian Highlands while Tiwanaku established its political center next to Lake Titicaca towards what is modern-day Bolivia. The discovery of their material culture around this particular area testifies to the extensive territory and populations subject to the influences of these two states. Thus, textiles related to these two cultures share many similarities. Their tendency towards geometrization though an abstracted language as well as the incorporation of distinctive garments into their repertoires, such as tunics and the four-cornered hat, are part of the analogies. However, Wari and Tiwanaku textile art are essentially distinct, mostly in terms of structural construction and iconography. The Wari surviving textiles include tapestries, four-cornered hats, and tunics from the most finely spun yarn probably for high-ranking officials. Both cultures mastered the tapestry technique creating some of the finest textile masterpieces ever known in this technique. 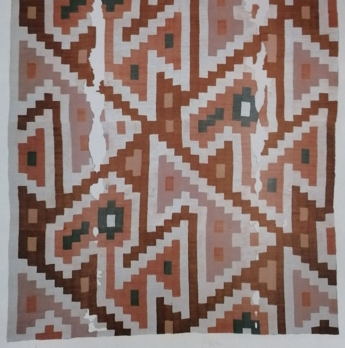 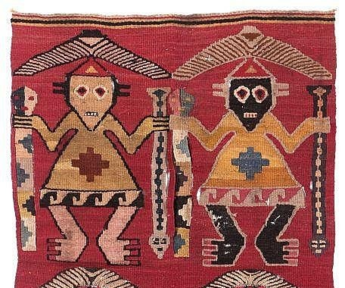 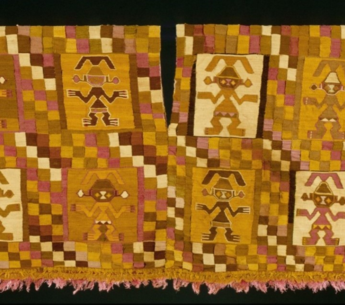 Some of the main cultures of the Late Intermediate Period were two coastal cultures, Chimú, and Chancay whose textiles reflected a more secular manner of representation, incorporating elements of flora and fauna as well as anthropomorphic motifs. Both cultures practiced sophisticated techniques, such as the discontinuous warp and weft technique. The variety of figurative repertoire particular to this period was widely represented by pattern bands, probably having served as samplers. The Chimú incorporated birds and fishes motifs making use of bright, vibrant colors. While the Chancay culture tended to use softer colors in their textiles, incorporating different styles including openwork, painting, slit tapestry, and three-dimensional figures. The impressive Chancay gauzes consisting of over-twisted cotton yarn had magical religious purposes and were used to cover the head of the dead, as headdresses. In this case, the process of attaching, knotting, and twining additional threads onto the net shows that the action of making becomes a ritual on itself. In this period, Ancient weavers had achieved to master nearly every technique of weaving then known. 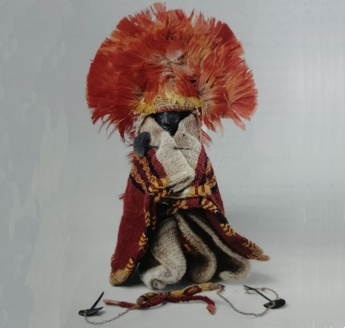 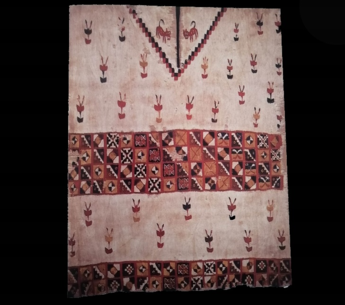 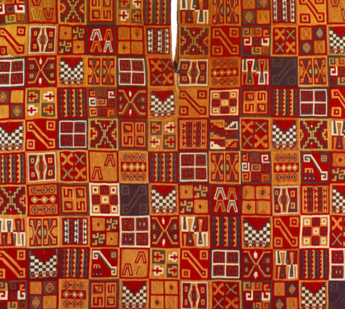 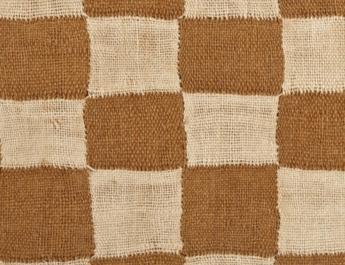 As the inheritors of a long and highly developed textile tradition, the Inka became the masters of Andean textile art. The official character of Inka textiles was transmitted through a strong geometrical symbolization statewide. The diverse textile expressions of this epoch, among them the unku or shirts woven with the tapestry technique, the remarkable featherwork in large formats, and different woven pieces of the finest quality such as bags, belts, and headbands served as an indicator of status and power. Via iconography and other details, social order was maintained in the empire as only certain groups were allowed to wear certain techniques and designs.

Awaska, standar cloth, thick garments worn as standard among the lower-classes of the Andean highlands.

Qompi (cumbi or kumpi), the finest Inca textiles of the nobility and the royalty, including the emperor. These textiles were of exceptionally high quality and produced in state-run institutions called aklla-wasi. The chosen women (aklla in Quechua) wove clothes for the nobility and clergy. A full-time male weavers, the qompi-kamayok produced qompi cloth for the state. Qompi was made from the finest materials alpaca, particularly baby alpaca and vicuña fiber were used to create elaborate and richly decorated patterns. The finest Inca cloth had a thread count of more than 600 threads per inch.

The style of Inca clothing was subject to geography. Heavier, warmer materials were common in the colder Andean highlands (such as llama, alpaca and vicuna fibers). While lighter cloth was used in the warmer coastal lowlands (usually cotton). However, the basic design of Inca costume differed throughout the Inca realm, with the quality of the materials and the value of decorative items making most of the differentiation of the social ranks.

Two types of looms were used during the Incan Empire, the back strap loom and vertical kind. Several techniques were used to produce fabric, including plain weave, tapestry weave, and scroll weave. Borders of embroidered tunics and mantles were often decorated with yarn tassels or fringe.

The khipu was another of the most important textile expressions during the one hundred year period that the Inka culture lasted. Their recording technology, using textile fiber as a base, served for the state´s organization and transmission of knowledge. Throughout this time the textile production increased considerably, as the Inka established m´ita or textile-based tax. 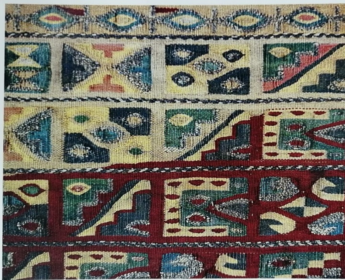 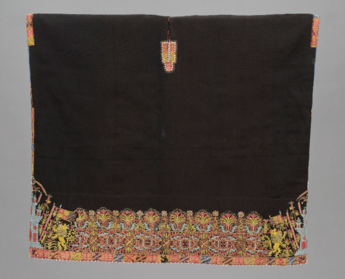 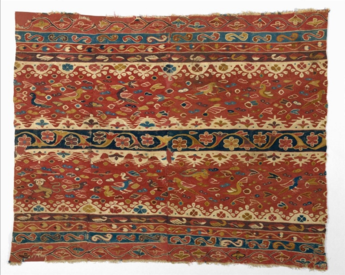 The Spanish colonial settlement over ancient Peru in the sixteenth-century meant a time of cultural destruction and imposition of European traditions over the indigenous Andean culture. The colonial rule aimed to destroy the Inka quadripartite state named Tawantinsuyu (Land of the Four Quarters).

Along with the devastating colonial project, the textile production centers, or Acllawasi, came under direct attack as soon as the Spanish noticed how crucial Andean weaving was, not only to the state but to the indigenous identity and system of beliefs. Andean master weavers thus became prohibited to continue with their sacred textile practice. Instead, they were used by the colonizers as an exploited workforce to reproduce European models, sending those textiles back to Europe for commerce. This system of textile workshops, known as obrajes, was focused on producing low-quality cloth for working-class people. New weaving tools and equipment were introduced, such as treadle looms and reeds, as well as new materials such as sheep, silk, and metallic threads.

Without Incan oversight and with changes brought by the Spanish, textile quality declined. Part of this was due to the lack of Inca enforcement of special techniques and design structures. Another contributing factor was the conscious move by the Spanish to produce low-quality, uncompetitive textiles.

Despite the Spanish attempted to wipe out Andean textile traditions, indigenous weavers continued to produce traditional clothing in fine vicuña and alpaca fiber, with silk and metallic threads as added exotic elements, they were particularly reveled by shiny materials. Andean weaving during the colonial period come to symbolize indigenous resistance from Spanish domination. 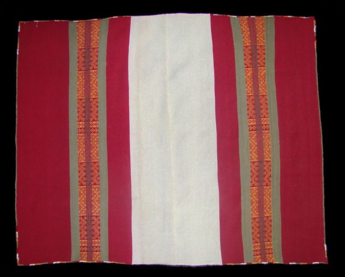