The community of Huacatinco is located in the Ocongate province to the south of the Cusco region, a land that is rich in natural beauty, culture, and ritual, yet it is considered one of the poorest regions of Cusco due to the lack of sustainable food growth for its inhabitants. Many remote communities of the Ocongate province must be self-sufficient as government services, including health care and public education, are often too far away to be easily accessible. The people of Huacatinco`s survival depends primarily on their herds of alpaca and llama, as these animals provide them with both wool for warmth as well as meat for their families. Huacatinco is a very small community, and many family members live high up in the mountains, where they can more easily tend to their herds which graze on a tough grass called ichu in Quechua, a native language that is spoken throughout the Andes.

Life is harsh in Huacatinco not only due to its remoteness and high altitude, the community is spread out between roughly 3,600 to 4,100 meters (11,811 - 13,451 ft) above sea level, but also due to the hard, salty water that flows out of the only nearby spring and river. Neither alpaca or llama can drink this salty water, and the people of Huacatinco depend on rainfall for their herds. If too little water falls during the rainy season (November through April), that means that the alpacas and llamas will struggle for survival during the dry, cold season from May to September.

However, what Huacatinco community has in abundance, is in the spiritual and natural beauty of the region. The most important mountain god in the Cusco region, the Apu Ausangate presides over the community from the southeast alongside many sister and brother Apus that all capped with glaciers and snowy crags. Fierce clouds and hail storms swirl over the shoulders of these mountains and weather can change from one hour to the next, from sunny and hot to dark and chilly. At night, the Milky Way stands out clearly, one can see a crystal-clear path of white across a sky without any light pollution.  Each year in June, when the Pleiades disappear from the night sky, thousands of people from across the Andes come together in these mountains for the rituals of Q’oyllur R’iti, perhaps the most important pilgrimage and religious festivity celebrated since Pre Columbian times. Significantly, the Inka empire extended far beyond the borders of the modern-day Peruvian state, and these ancient rituals continue to bring pilgrims from thousands of miles away. Today, the people of the Andes continue to honor the Lord of Q’oyllur R’iti with days of intricate ritual, dances and music that unite communities and nations from across Andean countries.

In 2011, the Wiñay Awaqkuna Weaving Association of Huacatinco was the latest community to partner with the CTTC. Before this, Huacatinco weavers said that it was extremely difficult for them to find a market for their exquisite handmade textiles, which are often made with handspun yarn from their own alpacas. Community members had to travel three hours to the city of Cusco where it was difficult to find stores or possible clients, let alone to sell their art at a fair price. When Huacatinco weavers did find someone interested in purchasing their textiles, the clients often would take the products but not pay until months later, or at all. Today, approximately 25 adult weavers and 20 children and adolescents are members of the Huacatinco weaving association. Construction on their weaving center is still underway, but the weavers work with enthusiasm and pride to research and revive their textile traditions, including the natural dye process.

Many people from the Ocongate area where Huacatinco is located speak primarily Quechua and continue to wear their traditional clothing on a daily basis. Men use shirts and pants made from bayeta, a coarse woven cloth, while women wear pollera (large black skirts) and a short jacket over a shirt. Men also wear chullo, hats knitted from soft alpaca yarn that community members spin from their animals´ fiber. Both men and women highly embellish their vests, jackets, and chullo with embroidered white beads as well as pom-poms. Special chullo for festivities and other important events may be so heavily embroidered with these beads that they stand up straight from a wearers’ head and end in huge pom-poms of brightly colored yarn.

Before partnering with CTTC, community members continued to knit highly elaborate chullo while slowly losing their backstrap weaving knowledge. Today, the women of the Huacatinco association are working to recover their traditional backstrap weaving. Many women now weave scarves on the backstrap loom and some are even moving on to weaving blankets which are larger and more complex. 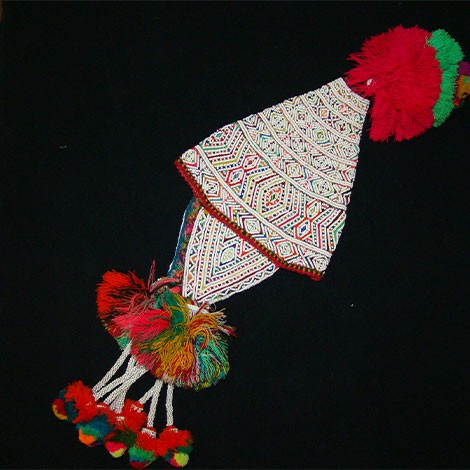 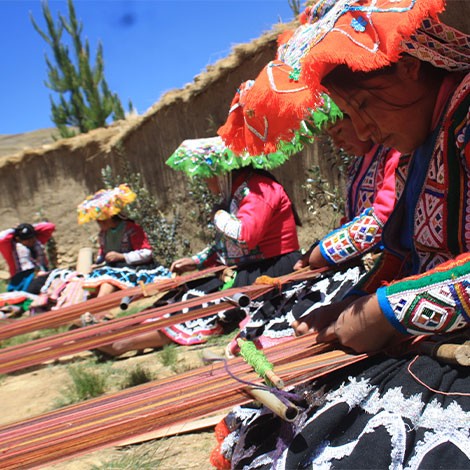 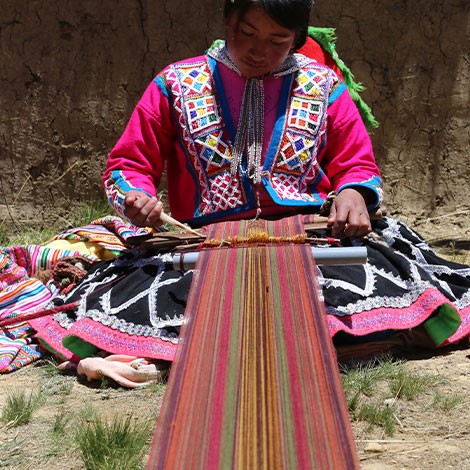 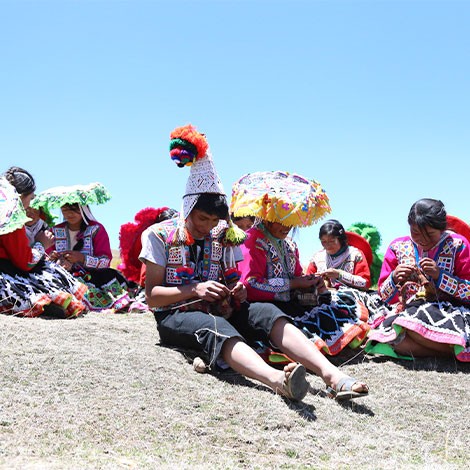 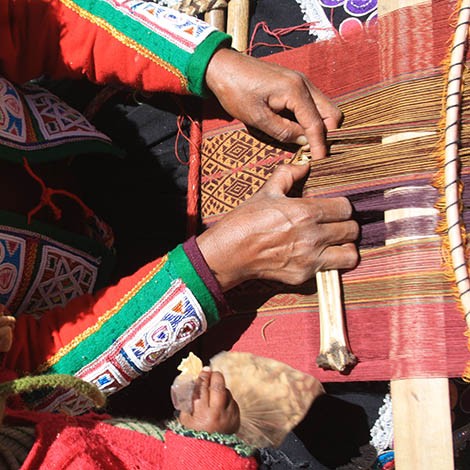 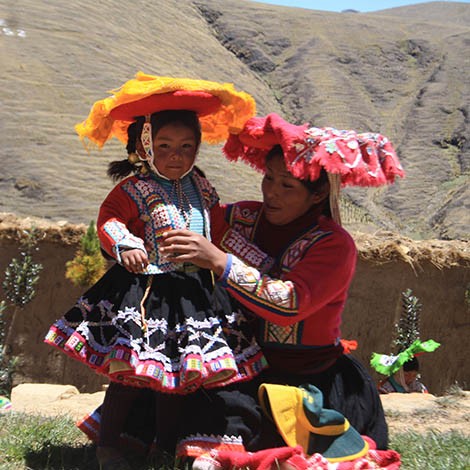 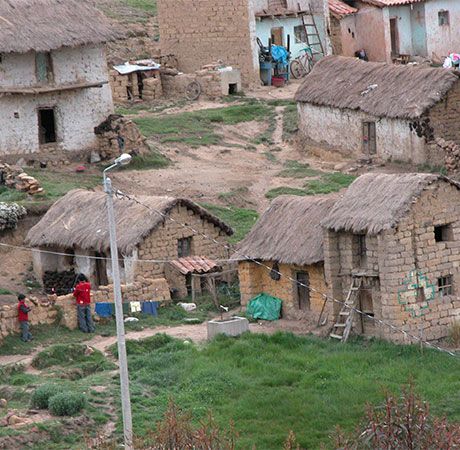 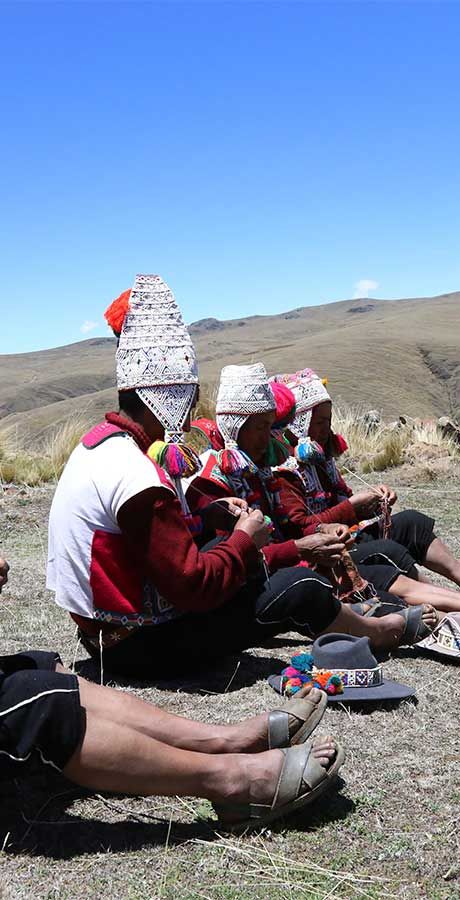 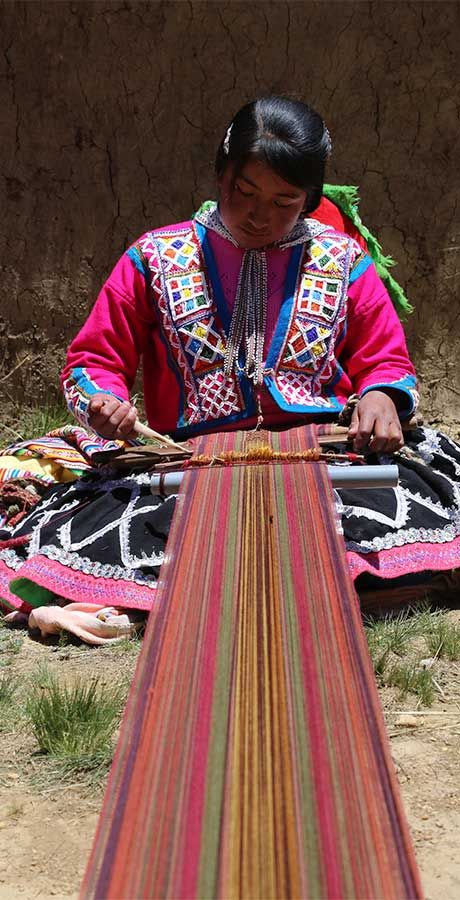 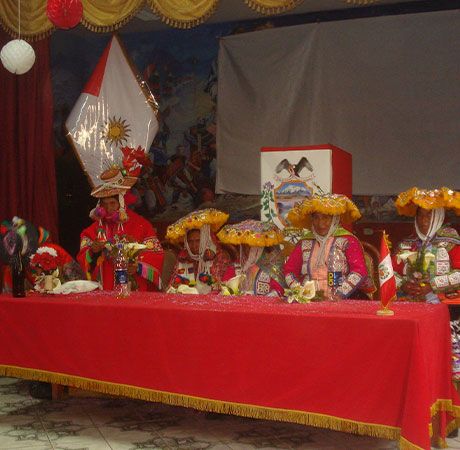 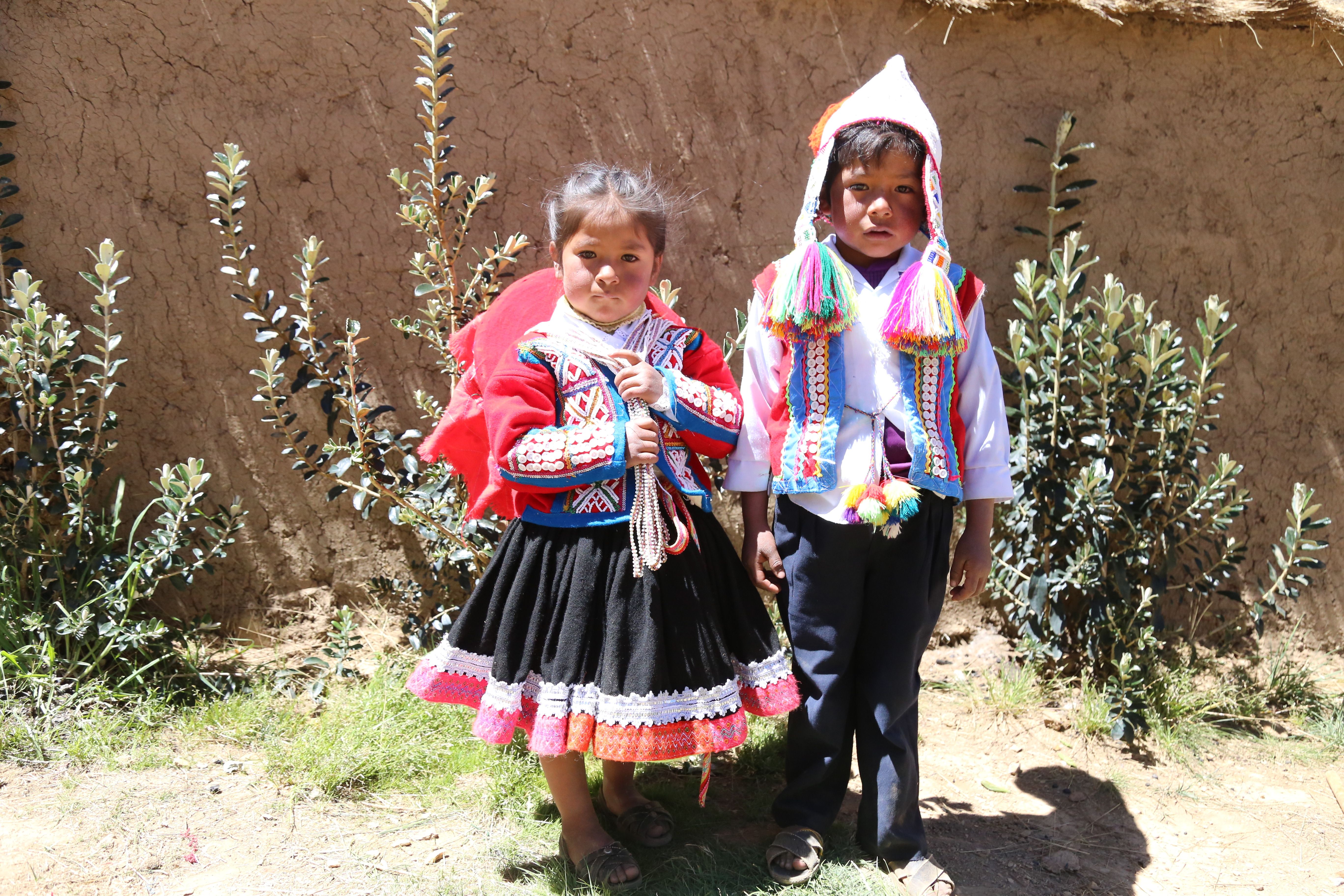 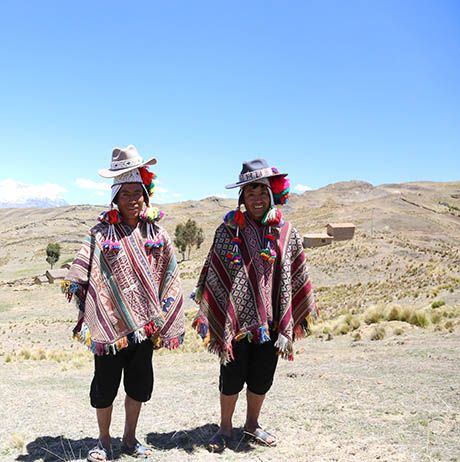 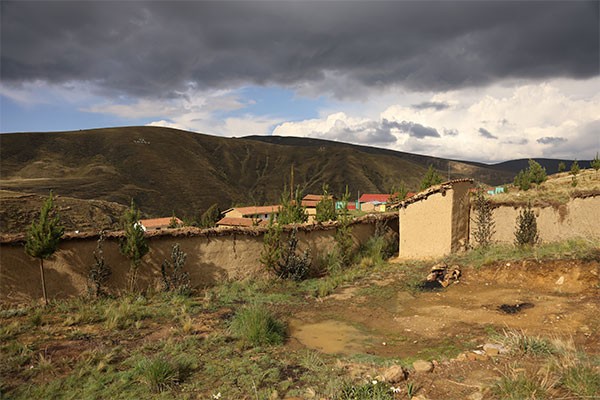 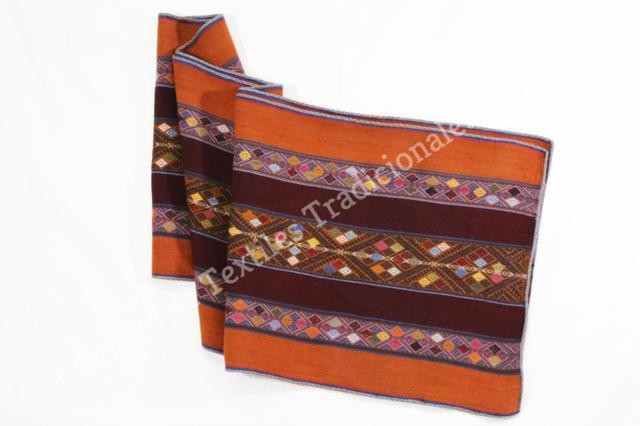 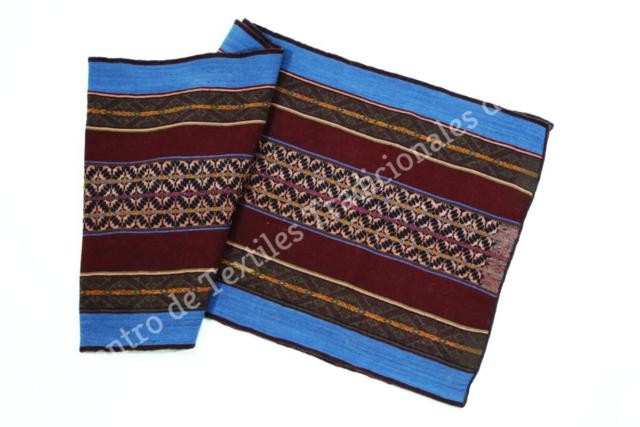 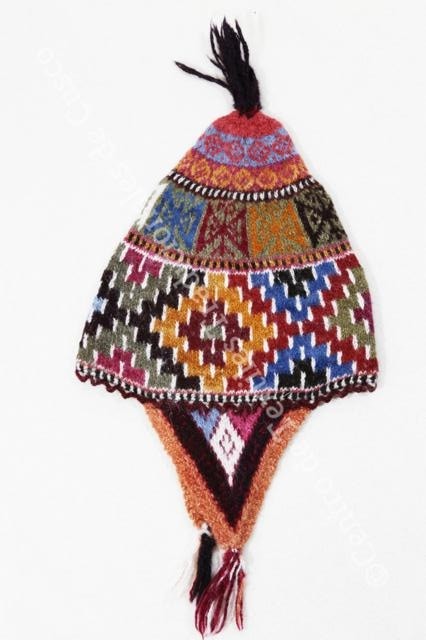 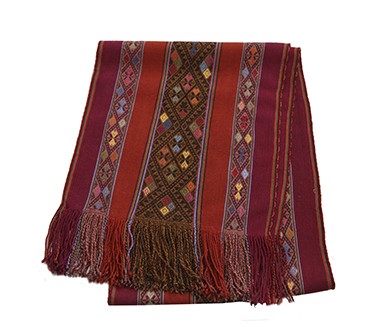