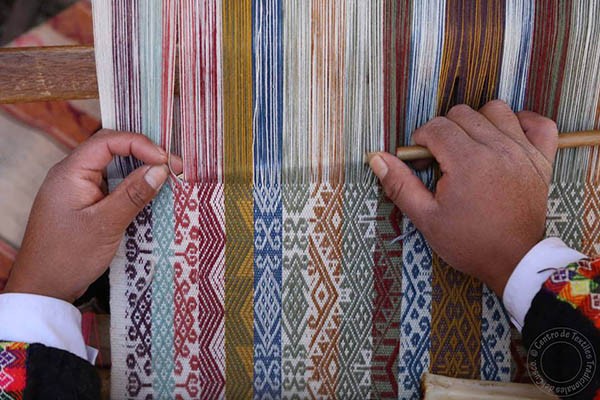 One of the characteristic garments of the indigenous population in the modern era is the poncho. It's external appearance and the act of wearing it makes the poncho to visually express a defined identity thus it was one of the most popular rural outfits in the republican era. Although the origins of the poncho are lost in time, in practice it replaced the unku, the sleeveless shirt, finely woven in cumbi with tokapu, made for the Inca nobility, which was banned by the Spanish from the beginning of the Colonial era. Currently, the unku, has been almost forgotten while the poncho remains alive in the Andes. Many of the 19th-century independence leaders used the poncho as a symbol feature for their revolutionary campaigns in South America amidst the emergence of the Republican era.

One of them was Simón Bolivar, one of the protagonists of the independence of Peru, who received a beautiful poncho as a gift woven by Cusqueñean ladies, during his stay in Cusco around 1825, where he signed some decrees in the benefit of indigenous people. This poncho, with a restrained striped design on raw cotton plain weave, is composed of eleven woven stripes with intricate patterns in pastel tones stitched to the base cloth. The pattern stripes made of silky threads stand out against the monochrome and mate pampa or plain weave. The technique of Bolivar’s poncho remains within the tradition of Andean warp face weaving, with supplementary warps.

This poncho has been replicated by the weavers of Pitumarca and, lately, by Chahuaytire weavers as the technique applied in the pattern sections, ley or supplementary warp, is especially practiced by these weavers. Even though the original poncho is a mix of cotton and either alpaca or wool yarn in the patterned area, the replica of the poncho has been entirely woven in wool, with naturally dyed colors for the motifs present along the narrow vertical sections.