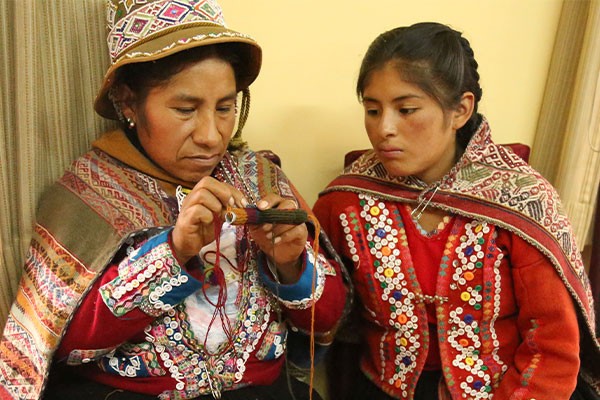 One of the main goals established for the international cultural event and conference organized by the CTTC, Tinkuy: Gathering of Weavers, was the re-introduction of ancient Andean techniques. For Tinkuy 2017, the chosen technique was the Cross-Stitch Looping. For its recovery, two weavers from each of the ten associations partnered with the CTTC  were designated  to participate in  the technical  workshop  held  in  Cusco by two textile professors from Chile, Soledad Hoces de la Guardia and Ana María Rojas. After a few months from the event, some weavers who participated in the workshop were already mastering the Paracas-Nasca looping technique. Consequently, they were able to give workshops on the technique to other few weavers from each of the CTTC weaving associations, who then returned to their communities and share their knowledge with the rest of their weaving center’s members.

That same year, the CTTC organized a competition on the newly recovered technique among the different communities, having two main categories: the Adult Weavers Groups and the Young Weavers Groups. This competition reinforced the revival of this important pre-Colombian technique and achieved to reintroduce it into the weavers' textile repertoire. The CTTC hopes that by reviving pre-Hispanic techniques in the weavers’ vocabulary, they become even more proud of their traditions, heritage, and identity. In Fall of 2018, the Center arranged a special exhibition at Museo Inka: “Reclaiming Ancient Paracas: The Struggle to Recover a Textile Technique” featuring the finest cross-stitch looping pieces accomplished by the weavers. Currently, part of this exhibition is on display at the CTTC gallery located in Chinchero’s weaving center.